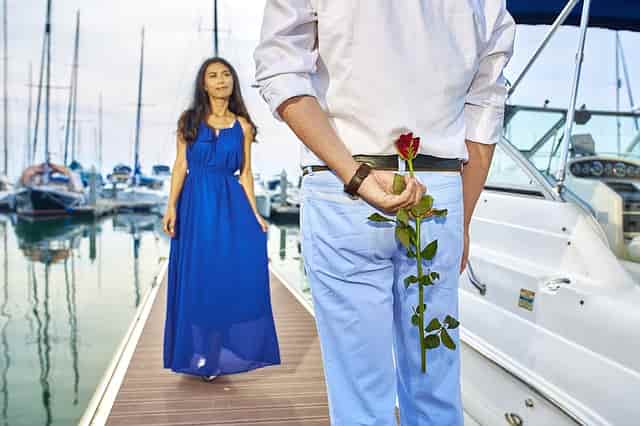 [nextpage]
You ever wish you could go back in time and just recreate all of the feelings you had for one another on the first date? Well, I’ve got a few ideas that might help you grab a hold of that old feeling.

The truth is, life can take its toll and sometimes we just grow a little too old with one another and it’s pertinent to work hard at bringing our youthful selves back to the forefront.

Although our physical selves will continue to grow older, it doesn’t mean we have to let that happen on an emotional level as well. Yes, there will be days when things get routine, but we can always vouch for a little excitement from time to time. Don’t you think?

Now this idea, I consider it to be something that you can only use once in a while. Simply because it too would become a predictable routine if used too frequently. Also, because it’s based on timing and money.

And since neither of those things are always available at the time we want them to be… you just may have to stash this one away until you find the appropriate time to use it.

The Date in the Making…

I was thinking a fun thing to do when things get a little stale is spend a few days away from one another. Now, before I go any further, let me say this isn’t a bad thing. This is all geared toward adding a little extra fun in the mix, if you’re up for a small adventure.

The two of you may be getting along famously, but if you’re looking for a little more festivity this could be it.

Here’s how I have it all in mind…

Once you’ve come to an agreement then it’s time to put the rest into action.

Okay, so let’s say your husband decides to be the one to spend a couple of nights at a hotel.

Right now, you might be wondering why he needs to leave the house at all.

Well, there is one very important reason why this is a good idea. Once the both of you separate and spend some time apart, functioning without one another for several days makes the anticipation of seeing each other again a lot more exciting.

The two of you are able to reconnect with the reality of spending time apart. Things will happen in your day that you’ll be able to converse about later, and vice versa.

Another reason is that it induces appreciation for the other person. Sometimes we take each other for granted, but when we spend time away from one another, it’s a lot easier to see how important that person is to us.

But I don’t want to get ahead of myself; it will make more sense as I move along, and by the time you’re done reading all of this it’ll all come together nicely.

So, now that you’ve both decided on the fact that he’ll be leaving for a couple of days, the next step is to spend a few days without any initial contact with one another. I consider one day too little, two days to be a fair amount of time, and three days to be just right. But how many days is really up to you in the end.

Once you’ve established that and he’s ready to leave, you’ll also want to make certain that you have no idea where he is staying. It’s important that he keeps this a secret.

After that, you can simply stash it away in a safe place and trust yourself not to use it unless it’s absolutely necessary.

Now that he’s gone and the house doesn’t feel quite the same without him, consider the following inventive ideas to turn this situation into a one-of-a-kind adventure full of romance and excitement…

All of those days you spent alone without him… keep them in mind, because they will work to your advantage. Because on day three it’s his job to call you up on the phone, whether it be at work or at home, and ask you out on a date!

Once you accept, you can agree on a time, and it’s his job to come and pick you up for your date.

While he’s been away, the house has been quiet, I know. It’s no fun. But now you’ve got something fun to look forward to. Coming together again… and shopping for a new dress!

That’s right, while he’s trying to woo you… you can wow! him.

You haven’t seen each other for three days and he’s planning on taking you some place neither of you have been before. Where? Who knows? That’s his choice. But wherever you’re going… you should be dressed to impress so that when he shows up at your doorstep he’ll be presented with his reward for all of his hard work–A stunning beauty at his side!

So it’s important to shop for something he’s never seen you in. Something you’re absolutely sure he’d love. Just like that of any first date.

Whether he decides to take you to a new restaurant, walk along the beach, or just an intimate dinner back at his place, this is where all of those important or unimportant events over the next few days have some significance.

Chances are both of you have quite a bit to talk about, although it’s only been three days you’ve been away from one another. Three days apart can conjure up a lot of feelings when you love someone and you’re used to them being around.

During your date, it makes for a good time to express what those feelings are and how much you appreciate one another. There are certain valuable things each of you bring to the table of your marriage, and maybe during the time you were apart… you got to see just how much he offered you on a daily basis.

And to add more on top of that… over the last few days, things may have happened in your life that he would normally be there to witness. Well, this time he wasn’t. So why not catch him up? It makes for good conversation—similar to the usual date scenario.

Once the two of you have come to enjoy the evening together, you’ve enjoyed the fine wine and nice dinner, and maybe had some chemistry on the dance floor. Aside from that, he’s enchanted you with his dashing good looks and charismatic smile.

Then once the night comes to full terms, you decide it’s time to go. You had a lovely evening and you reconnect on the way back home.

At least home is where you think you’re going, until he invites you back to his place (the hotel). You accept.

At the hotel, the two of you talk for several more hours and at some point find that old familiar chemistry drawing the two of you close once again. So you decide to stay that night at his place.

Hold on, before I go any further. Let’s rewind…

The two of you are getting along well. Everything is going smoothly. On the way home he invites you back to his place. You decline. He takes the bittersweet rejection smoothly. He drops you off at your house and walks you up to the door.

“I had a nice time tonight.”

“I did too,” he says, and with slight apprehension he leans in to kiss you (he knows he can’t resist. The laws of attraction have been drawing him in all night).

“I’d invite you in for a cup of coffee…” (We all know what that means!)

“Sure. Coffee sounds great,” he says and follows you inside.

Now of course the chance of either of you saying or doing any of that is slim to none, unless you’re role-playing, but that sure was a heck of a lot of fun to write. I couldn’t resist. I was on a roll!

No but seriously, I wrote all of that for a reason. Obviously you are reinventing the first date. One in which you get to choose your own adventure.

The idea of the hotel cannot only be used as a way for the two of you to spend three days apart, but also as an exciting incentive if you want that one-night-stand appeal with your husband–by going back to “his place” which was the importance behind you having no knowledge of where he was staying.

If you have no knowledge of where he’s staying, it’s all a complete mystery, and the suspense of that can add a lot of fun to an already adventurous night.

However, maybe he’ll be homesick and want to head home that night, hence the alternate ending above.

The fun of it is that a lot of it is such a wild card. Both of you have surprises to look forward to and the beauty of reestablishing intimacy in a new way while you choose your own adventure!