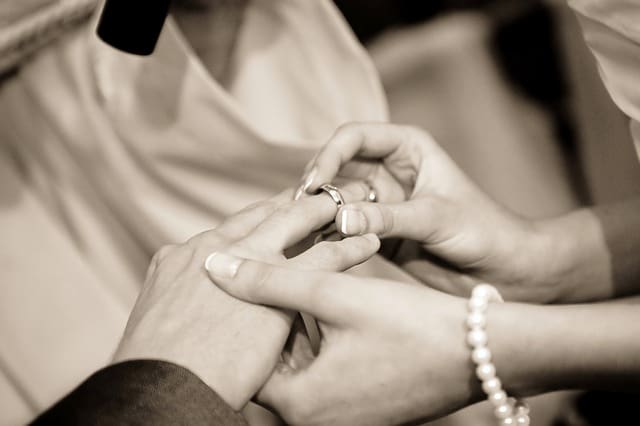 Weddings are that special occasion where two people come together to celebrate their love for one another. Yet, was it always this way? How did marriage come to be, and what is the meaning behind some of the many strange traditions observed today?

We assume that marriage has always been a sanctimonious tradition; however marriage was not originally about “holy matrimony” or “true love.” The original intent of marriage was to insure a safe environment for the bringing up of children, as well as the acquisition and transfer of property.

Indeed it is the rather superficial “marriage of convenience” which can be viewed as the original meaning of marriage. Eventually marriage became more about love, and less about property. Throughout that time, though, numerous different traditions and superstitions have surfaced. Here are just a few of these.

In Ghana, Africa, location is everything. Women in Ghana are viewed as the life force of the tribe. After all, they were where all the great warriors and chiefs came from. Because of this, Zulu culture referred to women as “the great homes.” Because of this status, it was considered customary for the husband to be, to move to his bride’s village.

The Mande people of Africa practice clitoridectomies (female circumcision). During this time, the women are taught how to be good wives. They are also taught a special “secret” language that is only spoken by married women.

A common African tradition is “jumping over the broom.” The broom has become a symbol of the sweeping out of the old, to welcome in the new. The part about jumping over is actually of North American origin. It was from the days of slavery, when slaves were not allowed to marry. By jumping over the broom, the couple was solidifying the seriousness of their marriage.

In 1076, in Europe, it was decreed that no man should give away his daughter, or other female relative, without a priestly blessing. Interestingly enough, it wasn’t until the 16th century that priests were even required to perform wedding ceremonies. Another interesting medieval tradition: women at the time would pluck their hairlines in order to attain higher foreheads, which were considered more attractive at the time.

Conservative/Orthodox Jews have a neat tradition where the bride walks 3 to 7 times around her husband to be. This is done to signify that she is a protective wall for her husband, and that by stepping inside, their family status has changed. Ah, but what of the breaking of glass? This is done to represent the many, many tragedies that have befallen the Jewish people. It acts as a reminder of those bad times.

Interestingly, the Muslim faith doesn’t really celebrate weddings. A marriage is strictly an officious occasion. The marriage occurs inside an office, rather than a mosque. The wedding is viewed as a private civil/religious contract. The only real tradition here is that the groom must give his bride a dower to serve as insurance for her future.

Japanese (Shinto) weddings are also small and private affairs, though they are far more elaborate. Both bride and groom sip three times from three separate cups of sake. It is done to guarantee luck and happiness in the marriage.

Chinese brides are given chestnuts and jujubes. This was done with the wish of the bride to conceive a son as soon as possible. Brides wear red dresses to symbolize the color of love and joy. As we shall see further down, Europeans viewed the color red in a completely different light.

Speaking of Europeans, many Eastern orthodox ceremonies featured the placement of wreaths on the heads of both bride and groom. It was done to symbolize their place as king and queen of the heavenly kingdom of Earth.

With such a wide variety of traditions out there, it is interesting to note that two of them are almost universal among human culture: the wedding veil and the wedding ring.

Wedding veils saw their origin among the Romans. Ancient Romans believed that women were particularly susceptible to possession by demonic spirits during weddings (perhaps they had a lot of runaway brides back then). The veil was used to “confuse” these spirits. To further help the bride out, bridesmaids were dressed in clothing similar to the bride’s. They were to act as decoys for these demons.

When Christianity took over, the veil was changed to represent chastity and modesty. This really took off in Britain during the 1800s. During some Eastern ceremonies, the groom is not allowed to remove his wife’s veil until after the ceremony. Jewish faith took the exact opposite approach. In some Jewish ceremonies, the groom first validates that the bride is his intended, before placing the veil over her face.

Wedding rings are probably the oldest wedding traditions out there. They can be traced back over four thousand years, to the Egyptians. Ancient Egyptians would make rings out of twisted pieces of plants. The ring was meant to symbolize a love with no end.

Egyptians and Romans both placed the ring on the 4th finger of the female’s left hand. This was done out of the belief that there was a vein on the 4th finger that connected directly to the heart. It was called the “vena amoris,” or “love vein.” When Christianity became the dominant religion of Europe, the vena amoris was replaced with a holy seal.

Priests would take the wedding ring and touch the first three fingers of the left hand (thumb, index and middle) while reciting: “the father, the son and the holy ghost.” Upon reaching the 4th finger, the ring was placed on it to seal the marriage.

For a long while the ring went from being a symbol of endless love, to that of ownership. The Romans used it like a branding. It was worn by the husband’s wife, to signify his ownership over her.

Two thousand years ago, in Asia, this ownership concept was taken to a new level with “puzzle rings.” These were rings that were worn by brides as a sign of loyalty. If a bride were to take her puzzle ring off, it would fall to pieces. These pieces could then only be put back together by knowing the solution to the puzzle.